HS2 Ltd have agreed to withdraw an advertisement for the HS2 project following a complaint to the Advertising Standards Authority, which claimed a video the quango produced was misleading.

Nineteen issues were raised in the original complaint brought by Camden resident Fran Heron, with the ASA taking HS2 Ltd to task over fifteen of them. Of the four issues not taken on, the ASA bizarrely said that it was alright for HS2 Ltd to say that ‘Rail travel has doubled’, as they did not specify the period over which this has happened. Instead of contesting the charge of false advertising, HS2 Ltd have agreed to withdraw the video, meaning the ASA will now not proceed with their investigation.

Issues raised in the complaint included these claims:

The Stop HS2 campaign has produced an edit of the video (embedded at the bottom of this page), detailing the points of the complaint, and whilst HS2 Ltd have withdrawn the original from their youtube channel, at time of writing, it is still available via the developers Vimeo channel.

Today, the Advertising Standards Authority have included High Speed Two (HS2) Ltd (trading as HS2 Ltd) in their list of ‘informally resolved cases‘, which states “After consideration by the ASA of complaints received, the following companies and organisations agreed to amend or withdraw advertising without the need for a formal investigation.” . This is the third time HS2 Ltd has agreed to amend or withdraw claims, and thus avoid having to defend itself following a complaint to the ASA, with the other cases being resolved on 29th May 2013 and 29th January 2014. Details can be foundhere

However, despite the fact HS2 Ltd did not refer the ASA to the Department for Transport, the HS2 Ltd press office have today claimed the animation had nothing to do with them, but was commissioned by the DfT. The DfT now claim they always intended to take the video down after a year because they had only bought the rights to the music for a year. This is despite the fact it is less than a year since the video was first published, it was removed a fortnight ago, before the complainant had received her letter from the ASA, and that it is still available to view via the developers’ channel.

“The HS2 promotional animation was very engaging and cleverly drawn. The great pity is it was ram-jam full of deliberate distortions, gross exaggerations, statistical manipulation and fairy-tale narrative.  There was nothing new there though, as it bears all the hallmarks of a typical HS2 Ltd public relations disaster. HS2 Ltd keep throwing public money at conning the public, but the public are not conned.”

“It is clear that HS2 Ltd have decided to withdraw a grossly misleading advert rather than have the Advertising Standards Authority rule that they had produced a grossly misleading advert, and are now trying to come up with feeble excuses, despite this being the third time this has happened. This advert was just one in a long line of incidences where HS2 Ltd and the Government have been willing to suggest that things they have made up because they sound good are indeed facts. The reason HS2 Ltd have to make things up to make their project sound like a good idea is because there aren’t any real facts which support the project.”

The text of the original complaint can be downloaded at: http://stophs2.org/wp-content/uploads/2014/10/franasacomplaint.docx 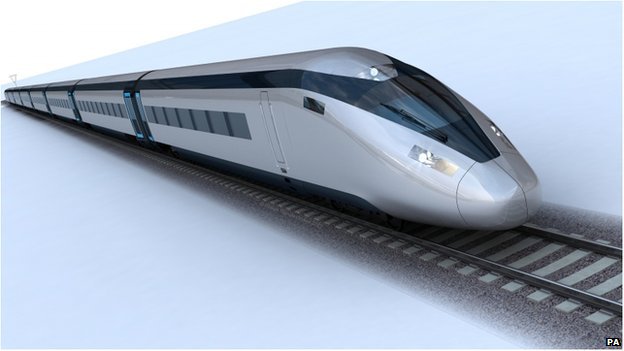 Plans for the HS2 rail line route in Staffordshire have changed, the company responsible for the project said.

It has now been proposed to go under the A38, the West Coast Main Line and the South Staffordshire line, rather than run over them on viaducts near Lichfield, HS2 Ltd said.

Two planned crossings over the Trent and Mersey Canal have been scrapped.

The impact on the landscape would be reduced, the company said.

Transport Secretary Patrick McLoughlin had proposed the changes, which reflected what many residents and stakeholders requested, it added.

HS2 Ltd said the changes would reduce the size of embankments in the area, as a result of work involving itself and Staffordshire County Council.

The council’s cabinet member for economy, environment and transport, Mark Winnington, said: “Although we are opposed to HS2, from the outset we have put all our efforts into getting the best deal we can for Staffordshire and its people.”

Mr McLoughlin said: “I am delighted that through partnership working with Staffordshire County Council we have been able to find an engineering solution that reduces HS2’s impact on the area.”

HS2 boss Sir David Higgins today saw with his own eyes the areas which will directly suffer thanks to the proposed £50bn high speed rail line.

Sir David, who took on the mantle of HS2 executive chairman in March this year, took up the invite from Aylesbury MP David Lidington and this morning met with locals in Wendover, Stoke Mandeville and Aylesbury to speak face-to-face about their fears.

He said: “I’d spoken to David and committed to coming up here and looking on the ground at areas which are most affected by HS2.

“We’re looking at continuing the work we’re doing with the communities to understand and look at the different methods of mitigation.

“I think on national infastructure projects which have a national role, there are always communities that are impacted and there are different ways of how communities are compensated, be it by land compensation or by environmental mitigation and it is always a case of striking a balance.”

He visited some of the areas most affected by HS2, including London Road, St Mary’s Church, Bacombe Lane and Ellesborough Road in Wendover; the Old Risborough Road in Stoke Mandeville and several roads just 150m from the line on the edge of the Hawkslade and Fairford Leys estates in Aylesbury.

He stood where 200mph trains could be thundering past less than every two minutes by 2026.

Mitigation discussed include planting trees to buffer noise, temporary link road construction to ease traffic congestion and the reinstatement of amenities such as golf courses, football pitches and playing fields that will be carved up by the line.

When asked whether the project’s hefty cost could be justified, Sir David said: “Our railway lines are very old – no new railways have been built for more than 100 years, and this is the first national railway.

“Other countries in Europe are decades ahead of us in building national infastructure. Getting through the Chilterns has always been a challenge, right back to the Roman days.

“It is obviously a route chosen by Chiltern Railways, the National Grid goes through here as do a number of A roads, but this issue is when we get closer to communities and clearly it’s about striking a balance.

“What today is all about is me seeing on the ground the result of the designers, engineers and community consultations.”

Following the tour, Mr Lidington said: “I’m pleased David agreed to come and was happy to meet people who are at the sharp end.

“It has left me in no doubt that these residents know what they’re talking about – they are the ones who have researched it and they know the detail.

“David was given some direct but courteous messages, and while the meeting hasn’t made me love HS2, it has been good to talk in detail about the effects.

“I’m sure we can work out a way to handle the construction better, and we need very strict plans put in place to minimise the impact of that on the local communities.

“David has said he was very impressed by the people he met today, and I feel he is very competent and capable as the man in charge.”

Graham Dellow (Secretary) welcomed all to the meeting and requested attendees add their names and emails to the MCAHS2 database, which currently stands at 175 people. GD introduced the members of the MCHAHS2 Committee present at meeting.

Brian Simpson, former Chair who resigned in January 2014 was thanked for his considerable contribution to and guidance of the group during 2013.

Geoff Edwards (Deputy Chair) presented the report for MCAHS2 activities for the year since April 2013; items covered were:

Chris Triffit presented the balance sheet for year ending 04 June 2014 (Appendix 3). The balance sheet will be audited shortly by a Chartered Accountant to conform to the constitution of the MCAHS2 action group and the bank account requirements.

GD explained that there was a vacancy for the post of Chair of MCAHS2, volunteers were asked to join the committee; none came forward. The existing committee members were wiling to stand for another year. Roger Percy proposed, seconded by Mike Slater, that the existing committee be confirmed in post, proposal was passed by a unanimous vote of members present.

Members were asked to forward names for the post of Chair of MCAHS2.

4.2. CT reported that MCAHS2 would b presenting a paper on the Engineering and Terotechnology challenges of HS2 to Stephen O’Brien MP Eddisbury and HS2 Ltd senior engineers provisional date 19th June in London and also a meeting with SO’D and local HS2 rep in Cheshire. Stephen O’Brien had defied the Con Party whips and abstained in the 2nd reading vote on the Hybrid Bill on the assurance that this meeting would take place.

4.3. GE requested volunteers to help at events, to form crowds at protests, join the committee and help in any way and provide email addresses to MCAHS2 to be put on mailing list for info, updates, newsletters etc.

5. Comments and Matters Raised by Members at meeting

This evidence of the start of the impact of HS2 blight is a possible subject for a press article from MCAHS2.

Signed as true record of meeting

Ros welcomed everyone to the Village Room, Lostock Green Methodist Church. The purpose of the meeting was to form an action group for the area between High Legh and Wimboldsley.

3.  How often the group should meet

Above all we must WORK TOGETHER, the primary aim is to

2.  Mitigate it. – The salt mines in our area, will not have been taken into consideration when drawing up the HS2 phase 2 route.

3.  Compensate – The Exceptional Hardship Scheme, we must lobby for the best compensation deal to fully compensate for the blight

Ros asked for volunteers for an action group. The following offered their time;

It was also suggested that we should include a Parish Councillor to join our group.  The Parish’s of Wincham, Lostock Gralam, Lach Dennis, Plumley, Pickmere, Davenham, Shakerley Ward, Winsford and Wharton, Tabley, Wimboldsley should be contacted for representation.

Andrew Shaw, Chairman of Pickmere Parish Council, informed us that he had set up a cluster group of Parish Councils that objected to HS2.  The group will have a meeting with George Osborne on April 26th.  The group have also taken a stand in the Cheshire Show.

UKIP will also have a stand at the Cheshire Show, some of which will be devoted to the stop HS2 campaign.

Many people complained about the lack of information on this, from their Parish Council, Councillors and our Members of Parliament.

Wayne left some 25 consultation forms for people to take.

The consultation can also be filled in online.  More information on hs2aa.com

Next meeting:  The Village Room

NB  Please note this is a change of venue to that agreed at the meeting.  There is a cost to this room, please could everyone contribute £1 on the evening.