Fears that high-speed rail project HS2’s £55.7bn budget could spiral higher have been underlined by an audit showing unauthorised redundancy payments to staff, far above the government cap on payouts.

HS2 Ltd, the publicly funded company building Britain’s new high-speed rail network, spent £2.76m on payoffs in 2016, of which only £1m was authorised, according to the National Audit Office.

The head of the NAO, Sir Amyas Morse, said the findings highlighted troubling “culture and behaviours” at HS2, which needed to be addressed if taxpayers’ money was to be protected. 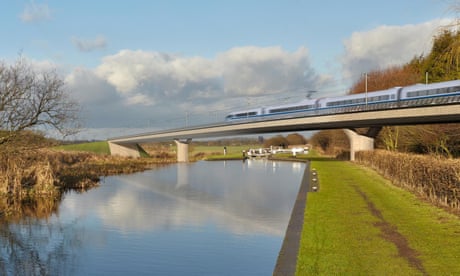 The NAO found that the redundancy payments were made in spite of explicit advice from the Department for Transport to HS2 Ltd that it was not permitted to exceed the civil service cap of £95,000.

HS2 circumvented the cap by placing a number of highly paid staff on gardening leave, continuing to pay them for several months although they were no longer working, on top of the maximum payouts.

A source close to Chris Grayling, the transport secretary, said the minister was furious at a breach that again raised questions over HS2’s financial management.

It comes in a week when the first major contracts, worth £6.6bn, were awarded for civil engineering works, including a £1.4bn award to troubled construction firm Carillion. Critics of the scheme have long doubted HS2’s ability to stay within a budget that has already been revised up significantly from the £32.7bn figure initially quoted in 2012.

The redundancies were prompted partly by a move of HS2’s head office to Birmingham and an internal reorganisation. The NAO found that 67 staff were made compulsorily redundant at a total cost of up to £916,000 when the statutory compensation due was between £55,000 and £115,000.

Morse said the episode showed “a weakness in HS2 Ltd’s control environment” and was “an example of ineffective communication both between the company and the DfT, and within the company”.

He said HS2 had “fallen short of the behaviour required” and that more robust control was “essential to ensure that delivery risks for the new rail line are appropriately mitigated, and that taxpayers’ money is protected as the programme forges ahead”.

The chairman of HS2, Sir David Higgins, said the NAO report showed the company had made a “serious error”. He said: “HS2 takes its responsibility for spending taxpayers’ money extremely seriously so when we get things wrong we will hold our hands up. We are now implementing all of the NAO’s recommendations in full and our new chief executive, Mark Thurston, will ensure this doesn’t happen again.”

Joe Rukin, the Stop HS2 campaign manager, said it showed the project was “being run with a blatant disregard for taxpayers’ money”. He added: “At a time when we supposedly have no money for the public sector workers everyone knows we need, this is beyond disgraceful.”

A DfT spokesperson said: “We take this matter very seriously and have made clear to HS2 Ltd in the strongest terms that we expect it to always meet its obligations and responsibilities to the taxpayer.”

HS2 has an agreement with the Treasury to allow it to pay higher wages than elsewhere in the public sector, which Higgins has insisted is vital to recruit the best talent. The previous chief executive of HS2, Simon Kirby, hired from Network Rail in 2014 to oversee the start of construction on a £750,000 salary, quit last September.