George Osborne’s plans for a Northern Powerhouse will be “seriously undermined” by High Speed Two (HS2) taking the wrong route through Sheffield, the city’s council leader has warned.

The team behind the £55.7bn railway, HS2 Ltd, has drawn up a route that takes the line to Meadowhall on the outskirts of Sheffield, but local politicians are determined to reap the economic benefits of having the station in the centre of the city. HS2 Ltd is concerned this would cost an extra £680m for a project that has been heavily criticised for its enormous budget.

But the council leader, Julie Dore, has told a number of ministers, including the Commercial Secretary to the Treasury, Lord O’Neill, that changing the route would in fact prove “cost neutral”.

This is because a spur from Meadowhall, costing nearly £600m, would be needed to connect with a later scheme, HS3, that will run through the centre. Also, the council could raise extra money through rates from businesses that would benefit from HS2 going to the centre.

Sheffield also argues that HS2 is using out-of-date maps that do not show how the Meadowhall route will run through housing and manufacturing businesses. The economic benefits of having HS2 in the centre are estimated to be at least £3bn, including 6,500 new jobs.

An earlier concern that Sheffield’s preferred route would add seven minutes to the journey time from Birmingham to Leeds has also been quashed, with estimates that this could be brought down to only two minutes. 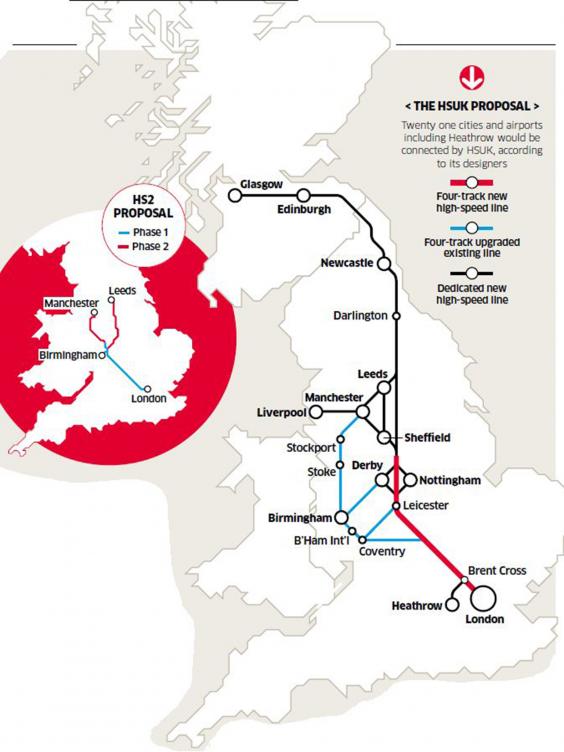 Ms Dore said she is seeking a meeting with the Chancellor to explain why the Meadowhall route would damage the Northern Powerhouse, Mr Osborne’s proposal to rebalance the economy from its dependence on London.

Transport for the North, the umbrella group that is one of the main drivers of the Powerhouse, wants the HS3 rail link to go to the centres of cities, which will include Liverpool, Hull, and Sheffield. It also wants to make sure HS2 and HS3 lines are designed in such a way that commuters would be able to travel between any two of Manchester, Sheffield and Leeds within 30 minutes, which would reap the maximum economic benefit and create a well-formed city region.

Ms Dore warned that the need to change from a high-speed spur at Meadowhall to get to central Sheffield would mean the time targets would be missed. Also, commuters are adverse to changing trains, so this could lead to fewer passengers going to Sheffield.

Ms Dore has called a meeting of senior officials from HS2 Ltd, Transport for the North, the Department for Transport, and Network Rail to discuss the route this week. Many officials are thought to be against the city-centre route because of complaints from other city councils in the region, which believe Sheffield would then suck up all the economic benefits.

Louise Haigh, Labour MP for Sheffield Heeley, said: “The current proposal was based purely on a short-term assessment of the initial cost rather than the long-term interests of the region, and even the argument on cost now looks questionable. A city-centre station has overwhelming support from local MPs and councillors, and what’s good for Sheffield will ultimately be good for the whole city region.”

Nick Clegg, the former deputy prime minister who represents Sheffield Hallam, has been briefed by council officials on the merits of a city-centre route in the hope that he still holds some sway with the Conservatives, having been in coalition with them for five years.

A source close to the council said: “Meadowhall is near a biomass plant and sewage plant – there is little scope for regeneration. The council is trying to meet the Chancellor in the New Year and make the offer of moving the route with all this additional economic activity at no extra cost.”

Colin Ross, leader of the Liberal Democrats on Sheffield council, said: “If the station is built at Meadowhall then future generations, 30 or 40 years from now,  will think we have been penny wise, pound foolish