Last Thursday, the Department for Transport published the actual passenger numbers for certain stations in 2016. We covered this at the time saying the passenger figures prove HS2 will be the â€˜fast track to disasterâ€™, as they show (as we have always known) that the growth in passengers is for short distance commuting services, not long-distance inter-city ones.

When the real-world numbers are juxtaposed with the HLOS passenger number predictions which are used to predict where investment is needed, it is clear the DfT havenâ€™t got the first clue what they are doing. But there is one set of statistics that perfectly proves HS2 is not only the wrong priority for investment, but actually goes to solve about the one thing that isnâ€™t a problem with the UK rail network; the passenger loadings broken down by individual rail operators.

Take London. Thatâ€™s where the HS2 trains are going to go, delivering that â€˜much neededâ€™ capacity. Â There are some massive figures in terms of the number of passengers who are standing on arrival every morning in the capital. In the three hour morning peak, 34% of passengers on c2c are standing, 27% on Southern, 30% on Southwestern. In total, 23% of the passengers coming into London in the morning are standing. That is surely real evidence of a capacity crunch? 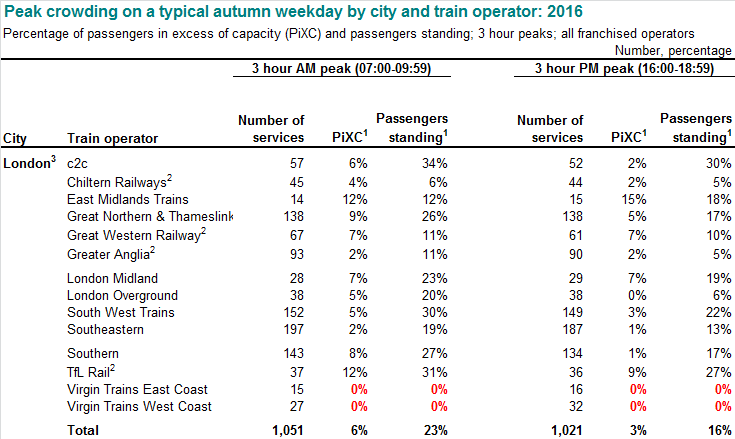 The figures arenâ€™t much more convincing for the other cities on the HS2 route. In Manchester, Trans Pennine trains have 18% of their passengers standing, Northern 15%. The number standing on Virgin Trains is again, nobody at all. In Leeds there are similar figures for Trans Pennine and Northern services, 17% and 18%. However, there are actually 4% of passengers standing on Virgin Trains, but of course these will be the people who got on 10 miles away in Wakefield. Itâ€™s the same in Birmingham where the 1% of standing passengers on Virgin Trains will be, as I can personally testify not long-distance passengers, but commuters who got on the fast train at Coventry. 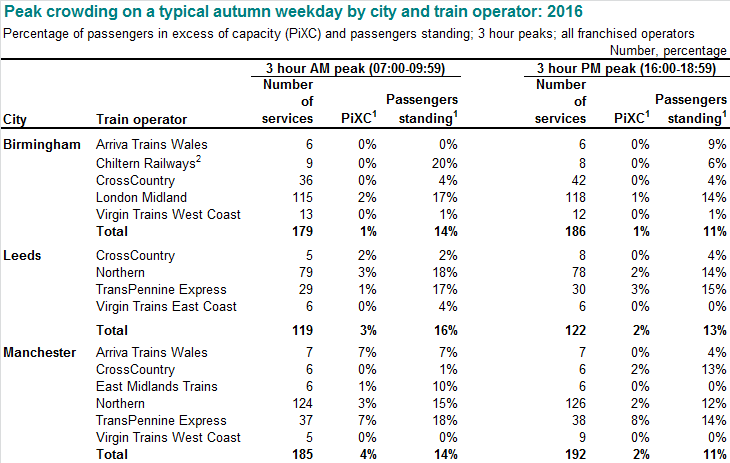 So there you have it. It is absolutely clear HS2 is not the wrong priority, but the bottom priority for investment when it comes to delivering capacity. Sadly as no-one promoting HS2 has ever been interested in the actual facts, itâ€™s unlikely theyâ€™ll notice.